An Introduction to the Bedouin Tea

Talking about Bedouin tea, this tribe has their very own special blend of tea which the collected from various dessert plants. Might be in the beginning they just do try and error until they really picked up the right ingredients to create amazing blend of dried leaves and herbs.
It is becoming an attractive cultural tradition of the Bedouin tribe now to have a cup of tea in the middle of the desert and invite lots of tourist who want to experience this unique event.
Even now, some of this tribe less nomadic, but the tradition from generations will remain, simple life style as drinking tea from the cup that really ethnical.
On one occasion, one of my Bedouin friends invited me for afternoon tea in his tent.  This is first time for me to experience with this strange tribe. They are very warm, welcoming to other peoples to their house to have a cup of tea. 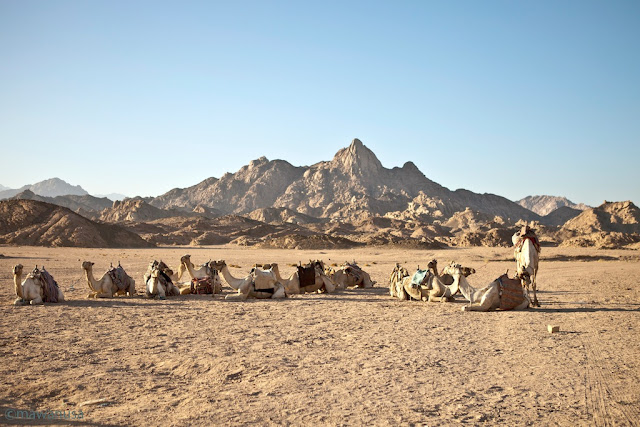 About the image above: Group of camels in the desert 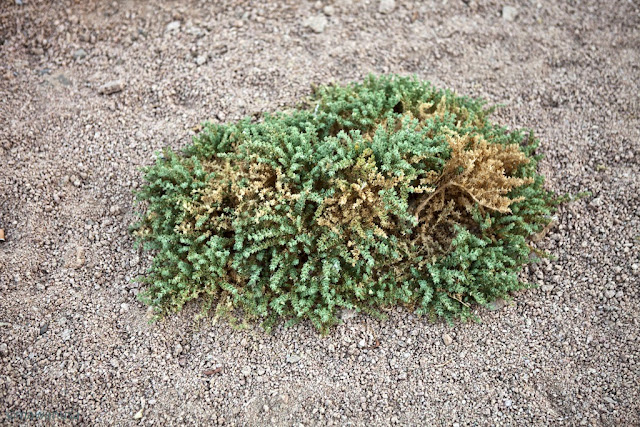 About the image above: Dessert plants that might useful for something.
The plant grows pesistantly in an extreme heat with now water for such long time
The basic tea blend in the Bedouin village comes from a dried leaves of dessert plant called ‘maramia’ or ‘marmaraya’, is naturally grown in the Sinai desert between Moses Mountain and Saint Katherine Mountain and only will appear there after the heavy rain probably January –March every year. The tribe will collect the leaves and dried it up the keep for longer shelf life.
From the ancient Egyptian text called ‘Papyrus Ebers’ (from about 1500 BC) noted various herb and spices that beneficial to human and the explain that ‘maramia’ leaves used to treat some dieses like high blood sugar and improve blood circulation through main and minor capillaries. The leaves also can improve our digestive system and increase the function of liver, maintained urine system, help to obtain the shape of the body and weight control. By simply drinking a cup of tea will help also to stop diarrhea and other stomach related dieses, restore mental function and improve memory, cure sore throats, help overcome cold and coughing and many more function that slowly will sure to discover. 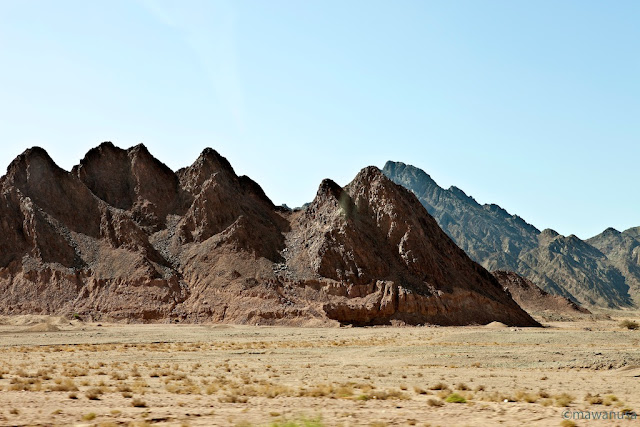 About the image above: Bedouin dessert, so quiet, only windy sound
is passing by and hot sunshine 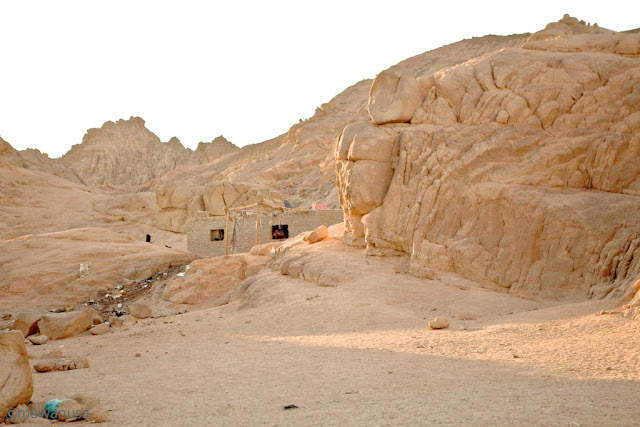 About the image above: One of the Bedouin house between the rocks
Marmaraya or maramia actually is one of desert sage family. The smell of the leaves is like a minty mixture of anise basil and elegant aroma of thymine. The leaves will give you a strong taste of bitterness when it boils in hot water. The dried leaves will spread the subtle fragrant of unforgettable aroma that will remain you for something that you experience for long time.
My first experience with Bedouin tea was after my whole day discovering the pyramid at Giza. A friend invited me to have tea in a small stall. I found the tea was a bit strange taste and he explained that was Bedouin tea. I love the herbal aroma with minty taste.  Because the tea taste was bit bitter so I add some sugar to give sweetness and was fine. The color of the tea was like just normal English tea, dark tea color. But after all I discovered that actually they mixed the tea blend with Libyan black tea leaves. 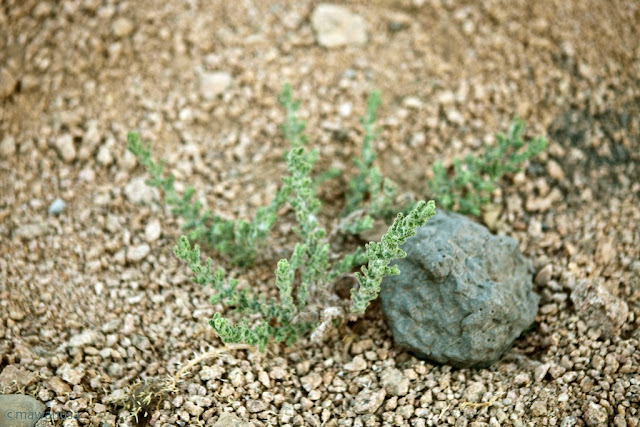 About the image above: Desert sage plant, a Bedouin tea leaf 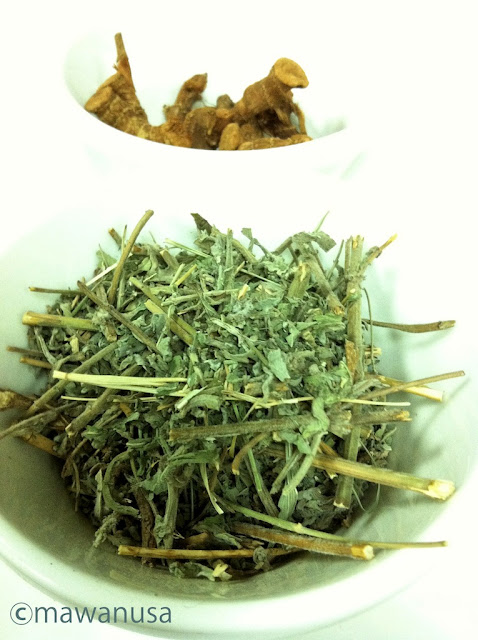 About the image above: The Bedouin blend of sage tea
with dried galangal in the background 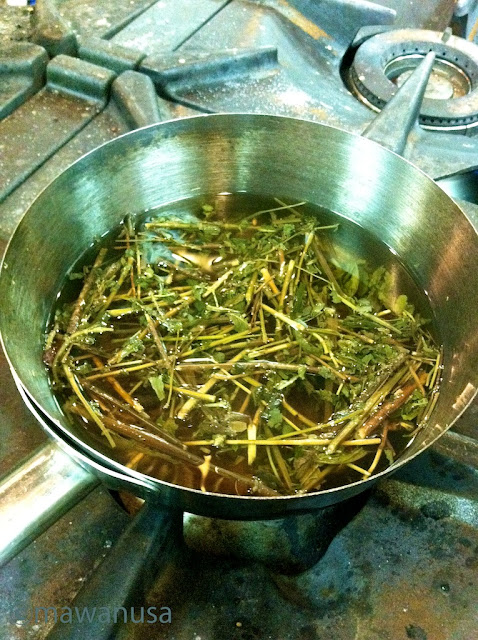 About the image above: Boiling tea leaves to prepare the drink 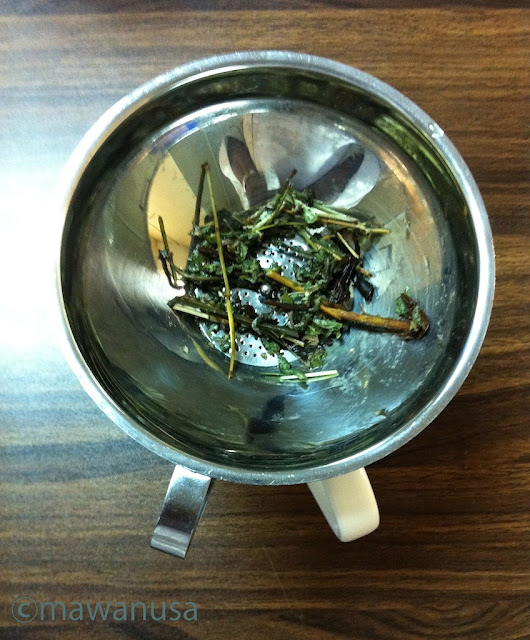 About the image above: Even the funnel can be a strainer of an exotic tea
Then I traveled for my work to Sharm El Sheikh. After few weeks of work I incidentally visited a market that sell. I start asking about the Bedouin tea, how it work and get some info about this amazing blend. Every stall has their own way of preparing this tea (they are not Bedouin), until one of my Bedouin friend prepare their real Bedouin tea. The very basic blend is the dried sage leaves, boil in amount of water. If they have some sugar, they will add in it, or otherwise they will drink the tea without sugar.
I love my Bedouin tea with some honey, so yummy. This recipe will give you a life time memory of the aroma of the tea.
ORIGINAL BEDOUIN TEA RECIPE
There were no such recipes for any blends in any Bedouin villages, if you need stronger taste, you may add more leaves, or less for lesser taste. Sound like very flexible or a thoughtful measurement of experience and tradition of mother tongue guidance to a palate. 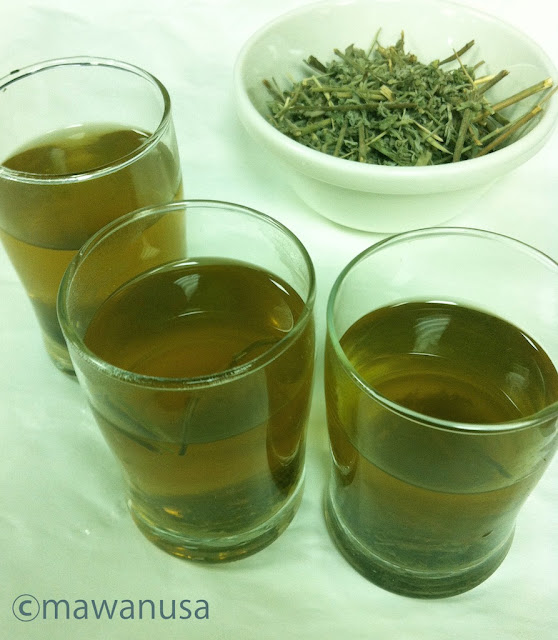 About the image above: My recipe of Bedouin tea is now ready to serve
Here I just give my assumption of weight for both ingredients to make easier for friend and viewers.
dried desert sage leaves (probably about 2-3 tablespoons)
water (maybe about 2½ cups)
Boil the tea leaves in slow fire for about 12 minutes and off the fire. Cover the pot tightly to ensure that tea has been infused to the liquid (water), this is about 5 minutes. And after you can strain the tea and pour to the cup to enjoy the drink while it still warm.  Will refresh your memory and give you mental strength. You can add some sugar if you like to avoid the bitterness of the leaves. 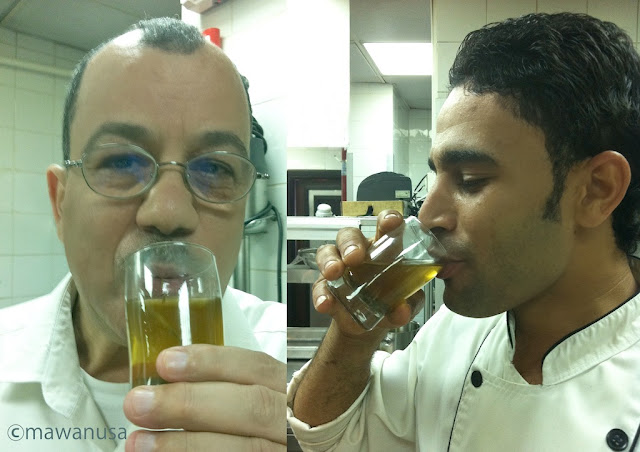 About the image above: Ahmed Nasr and Ibrahim Sharadi are enjoying my Bedouin tea  drink
In my Bedouin tea recipe, I would like to add 2-3 tablespoons of pure honey to the recipe above instead of sugar. The honey will give better texture of this herbal tea, to soften the aroma of the sage leaves and almost wipe-out the bitterness of the taste. I like the sage tea only without additional of black tea, give more delicate aroma to the tea cup.
VARIATION OF THE RECIPES
Since then, many visitors interact with the local Bedouin, the recipe blend maybe varies. Few peoples like to create their own recipes by adding black tea, cinnamon sticks, cardamom buds, rosebuds, etc.  All recipes are good and very interesting to try. Bedouin tea powder is also available now in the market but the taste is a bit different. I suggest you to try the sage tea at home as alternative of your afternoon tea habit of having a normal tea, earl grey tea, green tea or other type of tea. Try a Bedouin tea for sure!!
Posted by mawanusa at 2:07 PM